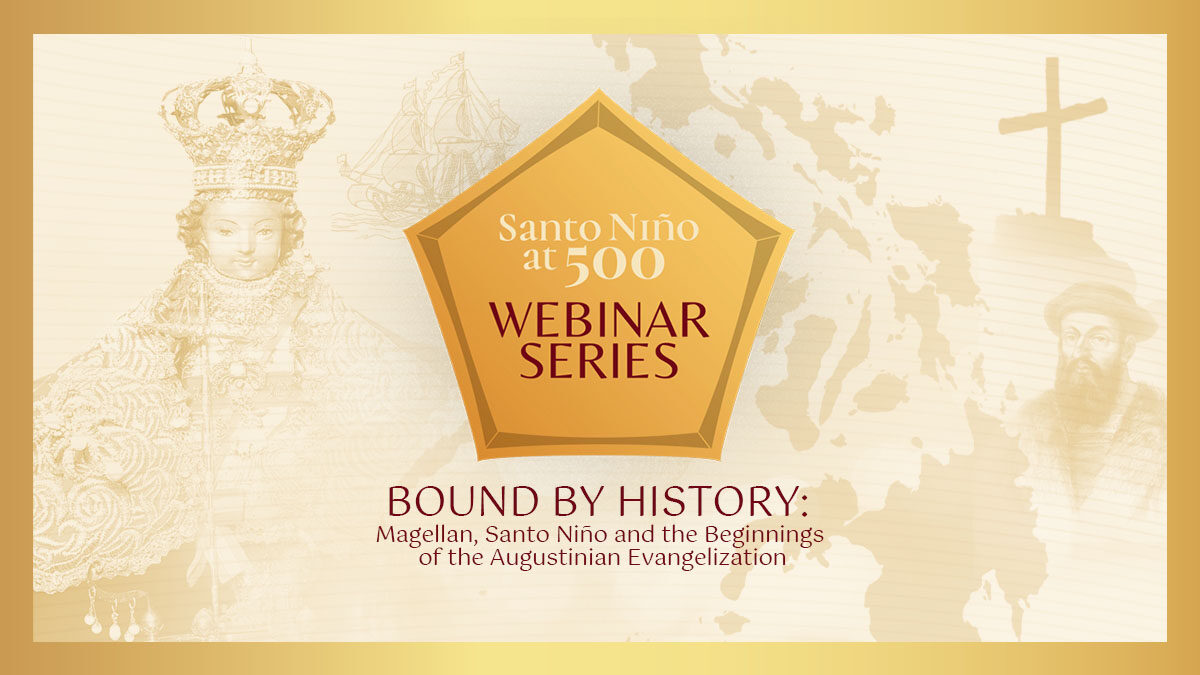 The image of the Santo Niño is the grand symbol that links us to the past and leads us to the future of our lives as a people of faith. Treading our lives to the future necessitates learning our lessons from the past to enrich our present undertakings. This webinar series has offered us this opportunity to learn about the history of our faith and of the Church in our country, intended to facilitate a more meaningful quincentennial commemoration.

While this COVID-19 pandemic has brought so many limitations in our lives in a variety of ways, we were still able to learn and ponder on among three great important epochs of our history—the pre-colonial Visayas, the Santo Niño: the beginning of Christian faith and the expansion of the devotion, the Augustinians’ their pioneering missionary work and its impact to the faith growth and the Philippine society.

The continuing devotion to the Santo Niño in the country today tells us that the faith introduced 500 years ago has now remarkably evolved as a Filipino-brand of Christianity.

As we look back to the event 500 years ago, we have turned to Antonio Pigafetta, the chronicler of the Magellan expedition. In his account, he described in great detail how our ancestors had gone out of their way to help build a platform made of bamboos in Limasawa for their Mass on that Easter Sunday, March 31, 1521, and another one in Cebu when they celebrated the first Baptisms on the third Sunday of Easter, April 14, 1521. Our ancestors indeed had accepted Magellan and his company as friends, which explains the swiftness of the process that led to the first baptisms in Cebu. Queen Juana, formerly Humamay, the wife of Rajah Humabon, had chosen the image of the Santo Niño as her baptismal gift “in place of her idols.”

The continuing devotion to the Santo Niño in the country today tells us that the faith introduced 500 years ago has now remarkably evolved as a Filipino-brand of Christianity. The finding of the image—also known as Kaplag—44 years later, set the tone for the beginning of the systematic process of Christianization. Fr Arnel Dizon, OSA in his paper A Journey of Faith with the Santo Niño, 1521-2021, made an emphasis on the finding as: “Transition from introduction and temporary or partial to a truly systematic and permanent evangelization, Christianization, civilization and colonization of the islands.”

Further historical and social studies can offer us fuller appreciation on how this faith had been indigenized and continuously Philippinized in the process as the devotion to the Santo Niño has also continuously evolved and spread, not only in Cebu but also to the other parts of the country. Historical accounts conjectured that the natives held the image of the Santo Niño in great esteem. It is noted that the image was not just preserved but also became among the deities of our ancestors in those years between the Magellan and Legazpi expeditions. Accounts have it that the image had been known as the powerful rain god, a powerful pagan idol that “granted the much-sought rain in times of drought and other necessary help in other pressing needs.” Today, thousands of devotees are flocking to the Basilica Minore del Santo bringing with them their petitions as they dance to the Santo Niño. This present folk religiosity connects us to the early beginnings of the devotion to the Child Jesus.

The devotion to the Santo Niño as a great icon of Filipino Christianity is interwoven in the eventual rise of our archipelago in the global stage.

The devotion to the Santo Niño as a great icon of Filipino Christianity is interwoven in the eventual rise of our archipelago in the global stage. Fray Andres de Urdaneta’s discovery of “torna viaje” did not just open for the eventual economic growth but it also paved the way to the furtherance of evangelization in the country. What Cebu and the whole archipelago, in general, to the world today can always be traced back to this return route discovery, an event that was ushered by the finding of the image of the Santo Niño. (Referred to as the Magellan’s image, the Santo Niño de Cebu is generally accepted as a remnant from the 1521 voyage.)

Though three distinct entities in our history, Magellan, the Santo Niño de Cebu and the Augustinians formed part a shared inseparable historical unity. Today, the Filipino Augustinians have endeavored to continue the legacy of the first missionaries. As the Santo Niño de Cebu icon is continuously revered in the Basilica Minore del Santo Niño, these missionary caretakers of this grand icon of Filipino Christianity heed the call to the furtherance in the continuing evangelization of peoples. The reading and learning of the half-millennia of the journey of faith offers not a mere triumphalist quincentennial commemorations but rather missionary inspiration alongside the humble recognition of the failures in the past. And with this, a challenge at this time even remains inevitable, that is, the unfolding of the ways in which the devotion is concretely translated into the fabrics of our lives.

History has it that Fray Martin de Rada led in the fight for justice as he himself witnessed the human rights abuses and injustices committed by his fellow Spaniards against the natives. With his epistolario, Fray Martin de Rada exposed the abuses and demanded remedies and reparations making him the forerunner of the promotion of human rights in the missionary work. (For this reason, Fray Martin de Rada has now been considered as a model in the promotion of justice and peace by the Filipino Augustinians). The 1582 Synod in Manila reflected the missionaries concern for the well-being of our ancestors. And throughout history, acts of charity done by the Catholic Church leaders and faithful and other Christian groups—such as the setting up orphanages, aids and shelters for typhoons survivors and those affected by current COVID 19 pandemic, and many others—all these are a testimony that the Filipino Christianity has gone beyond its colonial roots and has thrived into the values and cultural identity of the Filipino people.

The arrival of the image of the Santo Niño in 1521 and its Kaplag or finding in 1565 may have been accompanied by undesirable events. However, these events both left a legacy to our land: that we are now able to know the graciousness of God in the Santo Niño. Indeed, Divine Providence works in a way we could hardly comprehend. And the Bible offers us with stories where God is seen to draw good even from a moral evil. For instance, after being sold into slavery by his brothers, Joseph told them, “It was not you who sent me here, but God. You meant evil, but God meant it for good” (Gen 45:8, 50:20). And even God used Jesus’ death (the greatest moral evil) for our redemption, paving the way to the grandest celebration in Christianity—the Easter celebration. It takes time for us to see how God draws good from a moral evil. Many aspects of God’s providence are hidden from us. And while hidden, this does not mean that it does not exist. And we must say that the Divine Providence has endowed our ancestors the grace to discern in order accept what was good and reject what was evil in what the Spaniards had brought with them. It is with this same grace that we continue to chart our path towards the future as a country and as a people of God. And with the Santo Niño, we are always confident in the grace of the abiding presence of Father in this journey of faith.