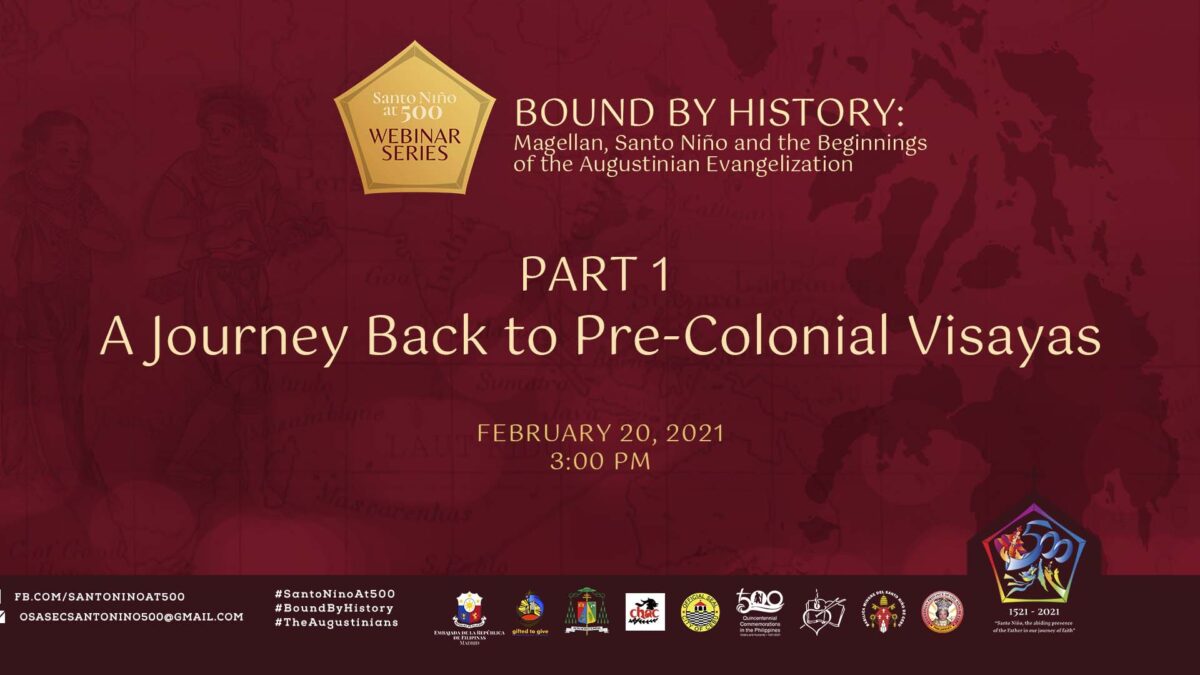 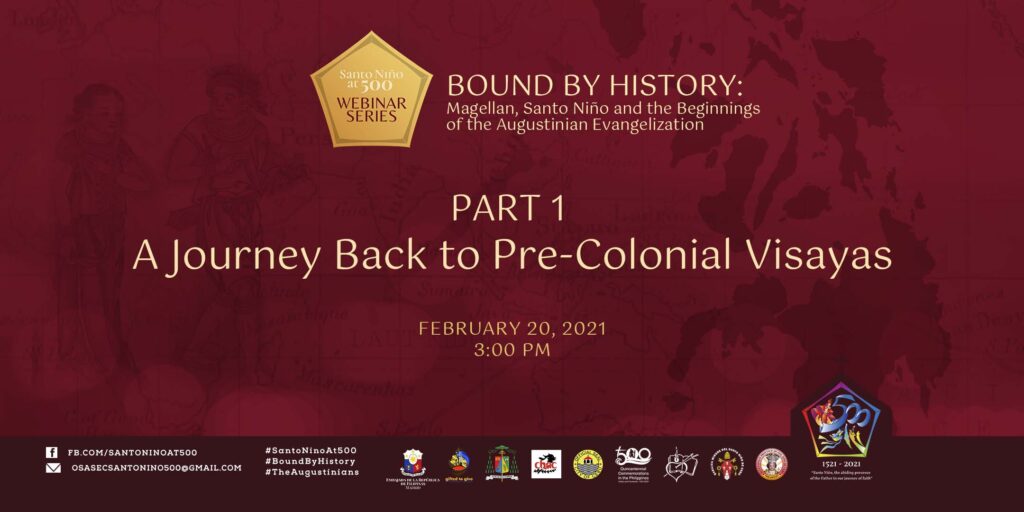 A Journey Back to Pre-colonial Visayas, the first of the three-part webinar series by the Santo Niño at 500 Committee of the Order of Saint Augustine – Province of Santo Niño de Cebu premiered live on Facebook on February 20, 2021. The three-part webinar series entitled Bound by History: Magellan, Santo Niño and the Beginnings of the Augustinian Evangelization is part of this year’s celebration of the 500th Anniversary of the Arrival of the Image of Santo Niño de Cebu.

Phillippe J. Lhuillier, the Philippine Ambassador to Spain, expressed in his message to the organizers and participants of the activity that the program is “fortuitous in that it allows us to remember our own history and how we Filipinos have risen to similar challenges in the past, which … is an especially relevant message during this period of the pandemic.” He expounded that “much of our historical and cultural heritage is linked, in one way or another, to the strong faith and wisdom of our ancestors. Our continued devotion and our capability to adapt to difficulties that makes us Filipinos look at things from a positive and hopeful perspective. He added that “[t]his melding of traditions and influences from both outside and within our archipelago is what makes the Filipinos’ practice of faith unique.”

Francis M. Navarro, Ph.D., an Assistant Professor of History at the Ateneo de Manila University spoke on Paleography and the Document: Understanding Archival Research. He emphasized that understanding our past would require tools that researchers must at least be aware of or be prepared to have as they delve into the various houses of research. He pointed out that understanding Spanish records located at the archives and in various libraries in the Philippines is not the same as reading an old letter or newspaper written in Spanish. He explained what paleography is and the background of old Spanish records to aid potential researchers interested in this period of the country’s history with an opportunity to extract vital information from these records.

Eusebio Z. Dizon, Ph.D., retired scientist and archaeologist of the National Museum of the Philippines, and professor of Archaeological Studies Program at the University of the Philippines, Diliman, presented Pre-Hispanic World of the Visayas: An Archaeological Picture. He shared that people of the Visayan region in central Philippines came from Austronesian-speaking people coming from southern Taiwan passing through the Batanes group of islands and northern Luzon from about 3,500 to 4,000 years ago. He revealed that this was concluded from information from historical linguistics and archaeology. The discipline of archaeology allows us to reconstruct the culture of the past by analyzing the excavated material culture in their environmental context.

George Emmanuel R. Borrinaga, Ph.D., assistant professor in history at the Department of Anthropology, Sociology, and History of the University of San Carlos (USC) briefly lectured on ‘Yawa pa’: The Pre-Colonial Religion of the Visayas. He shared that pre-colonial Bisayan religion was centered on the worship of deities and spirits (diwata, umalagad, etc.) linked to the natural environment, natural hazards, and departed ancestors who gave them good health, good fortune, well-being, ferocity (isug), and victory in warfare when properly appeased. He further revealed that “Yawa pa” seemed to have been a generic label for non-Christians (“los que no son cristianos”) from Christianized Bisayans to mark themselves off as different from their pagan ancestors and neighbors. Moreover, the term suggests that the entire pre-colonial religious system of the Bisayas had been subsumed under one word (“Yawa”) which became a curse and cuss word.

The February webinar which can be viewed at http://bit.ly/OSASantoNino500Webinar_Part1 is a pre-cursor to part 2 of the series entitled The Santo Niño: The Beginning of the Christian Faith and the Expansion of the Devotion which will be held on March 13, 2021 via several platforms.

The webinar series is in partnership with the National Quincentennial Committee, Republic of the Philippines, Cultural and Historical Affairs Office – Cebu City, 500 Years of Christianity – Archdiocese of Cebu and Philippine Embassy in Spain.