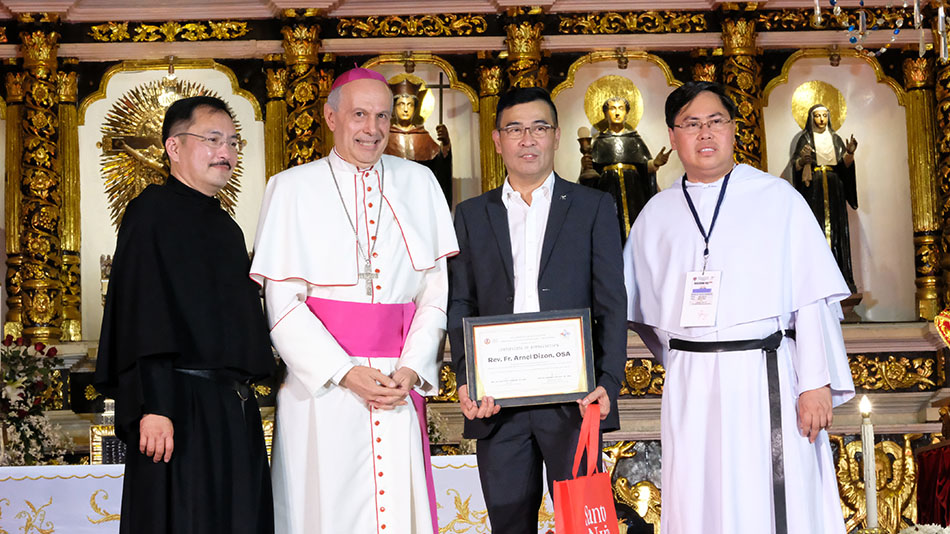 On November 13, 2019, a historical conference opened the Grand Launching of the Santo Niño at 500 Years at the Basilica Minore del Santo Niño de Cebu (BMSN).

Fr. Andres D. Rivera, Jr., OSA in his welcoming remarks expressed that as the Filipino population grew, our faith also grew. “The small seed of faith has grown,” he said. Looking back, it is indeed true that our religious devotion is inspired and positioned in the image of the Sto. Niño. Now, it is time to remember the beginnings of our Catholic faith and to compel ourselves to understand the living spirit and our devotion to the Sto. Niño in a deeper aspect.

“We are a learning community,” Fr. Aladdin P. Luzon, OSA highlighted in the overview and rationale of the conference. He explained that the event aims to offer historical insights, build deeper awareness of the Sto. Niño’s history, and increase future participation in the Church. He added that it serves as an avenue to fuel our love for the history of our faith and sustains our passion for the Sto. Niño.

He went on to say that we can learn from both our saints’ achievements and imperfections, that we can serve even if we are flawed so long as we keep learning from our mistakes and amending them little by little. Through the conference we are able to learn from the past and apply what we’ve learned to the circumstances we are facing today.

He mentioned that this coincides with the 1655th birthday of St. Augustine too.

The historical conference was led by Rev. Fr. Arnel Dizon, OSA who discussed a well-researched presentation titled “In place of idols: A journey of faith with the Sto. Niño (1521-2021)”. He broke down his speech into four segments: Context Setting, Traces and Pathways to Cebu, Cultural and Historical Processes, and Implications of 2021 Quincentennial Celebrations.

For context setting, he pronounced that the celebration focuses on victory and humanity. He also cited that the theme for the celebration, “Gifted to Give,” is taken from Matthew 10:8 which conveys the virtue of generosity.

As for the origins of the Sto. Niño, he shared that this began with the arrival of the Magellan-Elcano Expedition which gave rise to the birth of Christianity. The Christian faith was received by the Rama of Cebu, which in turn, paved the way for the first Easter Mass and Baptism in the country.

Father Dizon also quoted that, “The nature of history is biased, subjective, and selective.” He also talked about the Spanish-produced animated film, Elcano-Magellan and that the Sto. Niño is sometimes referred to as “Magellan’s image.”

More than that, the conference tackled on several proposals and counterviews such as the concept of a Japanese or Chinese artisan being commissioned for the image. Controversies were studied as well, particularly the indigenous statues of Pachamama or Mother Earth, anitismo, and how small household idols were eventually attributed to the Sto. Niño as a powerful pagan idol.

Additionally, Father Dizon elaborated on cultural and historical processes, stating that the Sto. Niño still granted pressing needs of the people even in the past. He also cited that Filipino nationality and the sentiments of the Spaniard were fused together because of the image.

“Looking forward implies a destination of future endeavors,” Father Dizon said for his last segment. He talked about the current celebration’s themes of sovereignty, unity, magnanimity, and identity. He underscored that we live in a permanent state of mission.