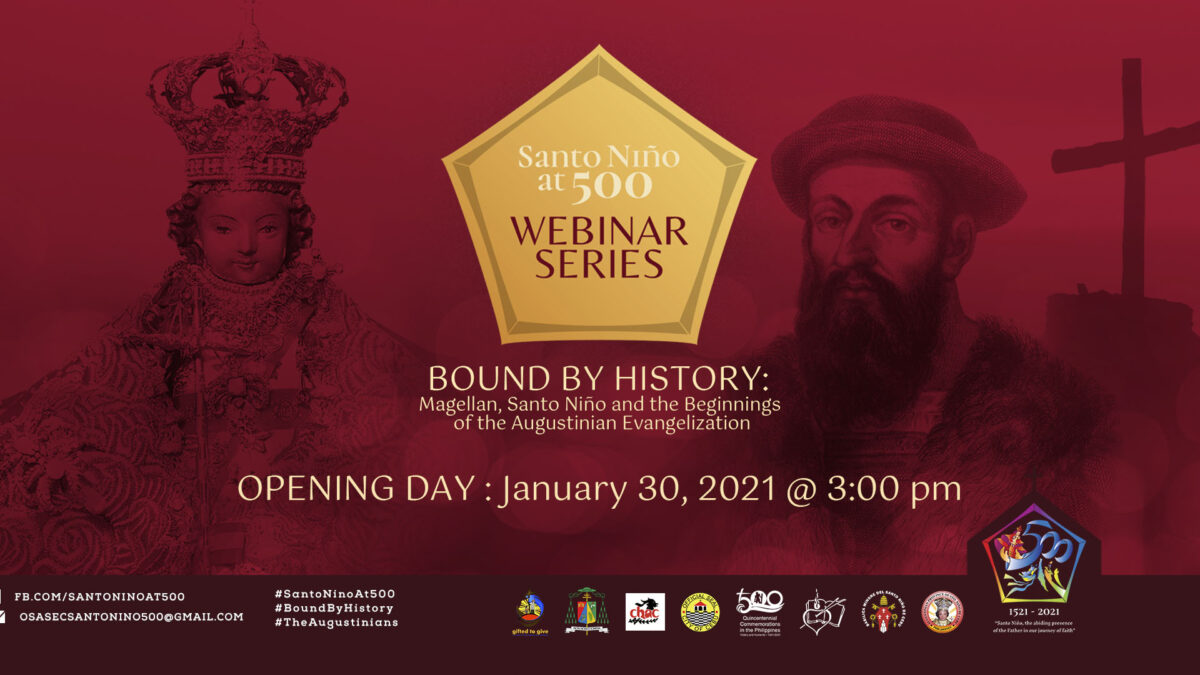 The Santo Niño at 500 Committee of the Order of Saint Augustine – Province of Santo Niño de Cebu opened on January 30, 2021, the three-part webinar series entitled Bound by History: Magellan, Santo Niño and the Beginnings of the Augustinian Evangelization in partnership with the National Quincentennial Committee, Republic of the Philippines, Cultural and Historical Affairs Office – Cebu City and 500 Years of Christianity – Archdiocese of Cebu.

Reverend Fr. Andres Rivera, Jr., OSA, the Prior Provincial of the Province of Santo Nino de Cebu-Philippines welcomed the participants to the opening program, highlighting that that “the 500-yr celebration is not just another milestone but is also essentially a testament of the divine action of the ever-present God of History.”

Most Reverend Jose S. Palma, DD, the Archbishop of Cebu, wished all participants a meaningful participation to the webinar and blessed them for looking back, delving, and reflecting deeply with profound gratitude on the people and the series of events that gave us Filipinos the Gift of Faith that we possess and share.

Cebu City Vice Mayor Michael L. Rama, Chairperson of the Cultural and Historical Affairs Office of the Cebu City Government, expressed his support to the activity, which he declared is an act of preserving our faith and enhancing and bringing of the importance of our heritage.

Fr. Aladdin P. Luzon, OSA, the Chairperson of the Santo Nino at 500 Committee, related that the three-part webinar series is an adaptation of what is supposed to be a series of conferences in three different zonal locations in Luzon, Visayas, and Mindanao, in response to the limitations imposed by the Covid-19 pandemic.

The talks will revolve around the connections between the introduction of Christianity by the Magellan expedition, the Santo Niño devotion and the early beginnings of the evangelization of the Philippines by the Augustinians. Fr. Luzon pointed out that “Magellan, the Santo Niño de Cebu and the Augustinians are three distinct entities but shared inseparable historical unity as they themselves are the enduring iconic representations of momentous unifying births, of a world, a country and a unifying faith.”

Historian and author, Danilo M. Gerona, Ph.D., shared an overview of the three important elements of the webinar series. He highlighted that there are details about Magellan that are not widely known – his piety, and the tragedy of his life; that the Augustinians tempered the rigor of the sword, in achieving their tripartite objective to evangelize, urbanize, and civilize the Philippines, the country believed to be the chosen place by Sto. Nino in the evangelization of the East, not Japan nor China, locations which were the initial choice of the Spanish Crown.

Part 1 of the series entitled A Journey Back to the Pre-colonial Visayas will be aired live via Facebook and YouTube on February 20, 2021. Part 2 entitled The Santo Niño: The Beginning of the Christian Faith and the Expansion of the Devotion will be on March 13, 2021. Part 3 entitled The Augustinians: Their Pioneering Missionary Work and its Impact to the Faith Growth and the Philippine Society will be on April 3, 2021.