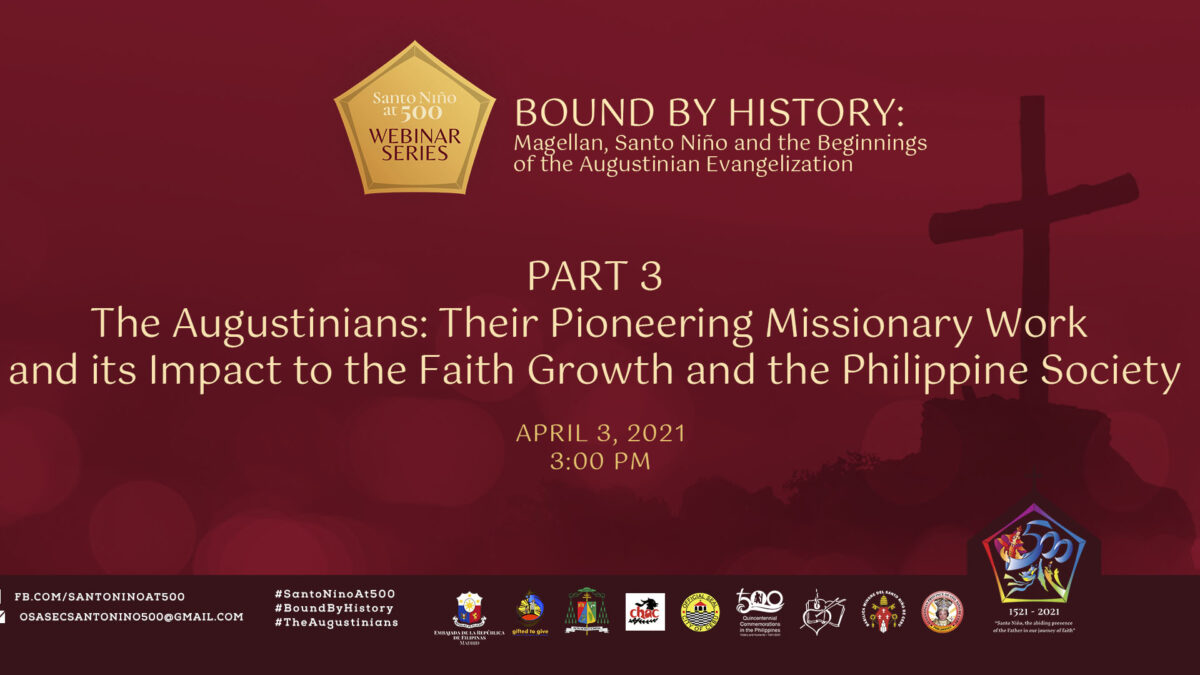 Historian-Theologians Present The Augustinians: Their Pioneering Missionary Work and its Impact to the Faith Growth and the Philippine Society in Augustinian’s Webinar Series 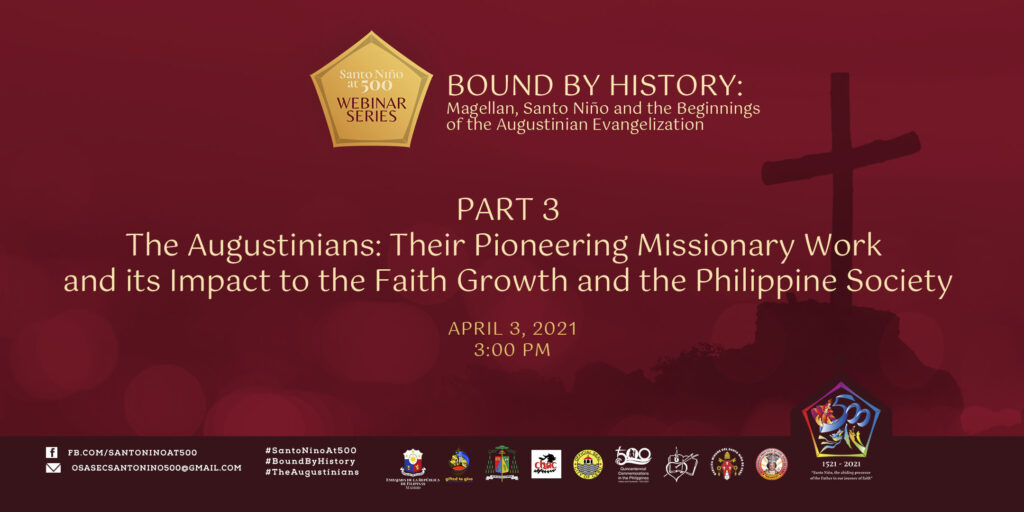 The last of the three-part webinar series by the Santo Niño at 500 Committee of the Order of Saint Augustine – Province of Santo Niño de Cebu premiered live on Facebook on April 3, 2021. Three historian-theologians discussed The Augustinians: Their Pioneering Missionary Work and its Impact to the Faith Growth and the Philippine Society.

Rev. Fr. Ericson Borre, OSA – member-correspondent of the Augustinian Historical Institute in Rome currently assigned at the Real Colegio de los Padres Agustinos in Valladolid, Spain – lectured on The Augustinian Missionaries and the Filipino Indios: Early Contacts, Treatment, and Relations. He shared that the Augustinian friars, being the first missionaries to be in contact with the Filipino Indios 44 years after Magellan was killed in Cebu, have a handful of materials that narrate their interactions with the natives. These are contained in the Libros de Gobierno (Archivo Provincial in Valladolid, Spain) which interestingly suggest an alternative perspective from the common historical narrative heard in school or read in history textbooks. He attempted to review and reflect the effects of the early conquest and mission to the Filipino Indios and how exactly the friars treated them based on the decrees issued by the Prior provincials and approved by the chapters. He emphasized that it is important to be able to put in place other pieces of our history, which may help us in understanding its flow without pinning down historical controversies that lead to the present scenario, most often converted as political events rather than simply day-to-day life encounter and assimilation between two worlds.

Rev. Fr. Arnel Samson Dizon, OSA – University Archivist and Vice-President for Administration and Finance in University of San Agustin, Iloilo City – expounded on the Impact of Fray Andres de Urdaneta’s Discovery of the Torna Viaje. He discussed that the tornaviaje refers to the return route to New Spain from the Philippines that traversed the vast Pacific Ocean from west to east. It conclusively established the trans-Pacific connection between Europe and Asia, through the Philippines and Mexico. From the commercial point of view, it opened new economic opportunities for the Spanish empire and its colonial dependencies. Urdaneta’s trip back to New Spain shortened the distance for travel and transportation. He highlighted that Urdaneta’s route made directly possible the launching of the transpacific galleon trade, the colonization of the Philippines, and the return journey to the western hemisphere. A feature article about Urdaneta can be read here: http://bit.ly/OSA_Urdaneta

Rev. Fr. Dedert Duarte – a graduate student of the Faculty of Catholic Theology of the University of Münster, Germany – talked about Fray Martin de Rada and the Defense of the Natives’ Rights. He shared that the Spanish colonial system and its structures, such as the encomienda, tributes, forced labor, and even the conquest and pacification of the islands, had been sources of tensions and conflicts between the natives and the Spaniards during the early colonial period in the Philippines. Having witnessed the human rights abuses and injustices committed by his fellow Spaniards against the natives, the Augustinian Fray Martin de Rada and his fellow missionaries called the attention of the Spanish authorities and demanded for immediate remedies and even reparations. The Navarrese friar believed that such atrocities were compromising the noble aims of both the Crown and the Church. A feature article about de Rada can be read here: http://bit.ly/OSA_deRada

A brief about Augustinians’ contributions and influences to the Philippine culture and society can be read here: http://bit.ly/OSAinPH

The three-part webinar series entitled Bound by History: Magellan, Santo Niño and the Beginnings of the Augustinian Evangelization is part of this year’s celebration of the 500th Anniversary of the Arrival of the Image of Santo Niño de Cebu.

The January opening webinar can be viewed at http://bit.ly/OSA_SantoNino500Webinar_Opening.

The February webinar about A Journey Back to Pre-colonial Visayas can be viewed at http://bit.ly/OSA_SantoNino500Webinar_Part1.

The March webinar about The Santo Nino: The Beginning of Christian Faith and Expansion of Devotion can be viewed at http://bit.ly/OSA_SantoNino500Webinar_Part2.

The April webinar can be viewed at http://bit.ly/OSA_SantoNino500Webinar_Part3.

Organized by the Santo Niño at 500 Committee of the Order of Saint Augustine – Province of Santo Niño de Cebu, the webinar series is in partnership with the National Quincentennial Committee, Republic of the Philippines, Cultural and Historical Affairs Office – Cebu City, 500 Years of Christianity – Archdiocese of Cebu and Philippine Embassy in Spain. More news and features about the Santo Niño at 500 celebration can be read here: https://www.santonino500.com/