Historians and Theologian Talk on The Santo Niño: The Beginning of the Christian Faith and the Expansion of the Devotion in Augustinian’s Webinar Series 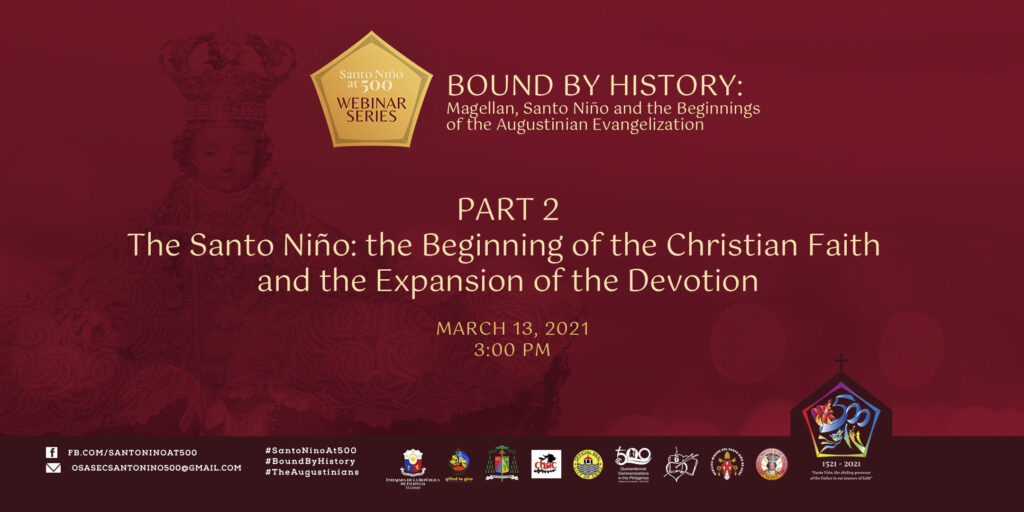 The talk on The Santo Niño: The Beginning of the Christian Faith and the Expansion of the Devotion, which premiered live on Facebook on March 13, 2021, spurred a spirited discussion among the webinar’s speakers.

Danilo M. Gerona, Ph.D., author, professor, and world-renowned historian spoke on The Impact of the Magellan Expedition. He pointed out that Magellan expedition not only introduced Christianity to the natives of the Philippines islands, it also paved the way for the sustained and systematic process of Christianization decades after. He further pointed out that the baptism opened a gap to the traditional concepts of marriage/polygamy and introduced the concept of monogamy when Datu/Rajah Humabon was forced to present only one wife in the person of the woman who was eventually named Doña Juana. The expedition also resulted to the first circumnavigation of the world by the remaining ship of the fleet. That trip led to the major scientific discovery that the world is spherical. It expanded the concept of global geography and gave birth to the science of cartography in Southeast Asia, resulting to the correction of the global map. Due to the lessons of that expedition, more matured principles of human rights were developed by the moralists and theologians and schooled them on how to deal with the natives.

Jose Eleazar “Jobers” R. Bersales, Ph.D., professor, museum director, and multi-awarded author expounded on The Santo Niño and the Evolution of the Cebuano Society. Dr. Jobers emphasized that no other religious iconography matches the enduring power and timelessness of the Santo Niño among Cebuanos and other devotees the world over. The gifting of the image and its survival amid the smoldering ruins of the same port settlement 44 years later reinforce all the many stories of miracles that have attended the image for centuries already. And yet this holy image was initially accompanied by the chaos of the colonial enterprise, forcing pioneering Augustinians like Fray Martin de Rada to come to the defense of the oppressed natives. Learning from the missionary experience a century earlier in Latin America, these pioneer Augustinian missionaries labored to learn and then to use the local language to convert the natives and redirect their pre-Christian religious psyche into the Catholic worldview. He explored this conversion paradigm, juxtaposed with historic events, and how they impacted Cebuano society today. He explained, in turn, why this devotion to the Santo Niño continues into the present.

Fr. Andrew P. Batayola, OSA, doctor in management, sought-after theology speaker, and president of Colegio de San Agustin, Bacolod, talked on HOPE: The Spirituality of Santo Niňo as a Child-Adult-Crucified-Risen Christ. Fr. Andrew shared that the image of the Holy Child is the representation of Jesus not only as a child but whole of the life mysteries of Christ — from infancy, public ministry, passion and resurrection. The theological reflections of the image as a child, his hand holding the scepter and orb, the red cape and white inner garment were the basis of such claim. Thus, the Santo Nino is truly an image that teaches us a lot about Christ and our faith as Christians, he professed. In the icon we can contemplate the joyful-luminous-sorrowful-glorious mysteries of Jesus’ life. The Santo Nino is the Child-Adult-Crucified-Risen Christ. He reflected that The Santo Niño serves as source of hope – guiding, courageous, redemptive, protective, restful – to people of yesterday and today.

The three-part webinar series entitled Bound by History: Magellan, Santo Niño and the Beginnings of the Augustinian Evangelization is part of this year’s celebration of the 500th Anniversary of the Arrival of the Image of Santo Niño de Cebu.

The March webinar can be viewed at http://bit.ly/OSA_SantoNino500Webinar_Part2. The last part of the series entitled The Augustinians: Their Pioneering Missionary Work and its Impact to the Faith Growth and the Philippine Society will be held on April 3, 2021 via several platforms.

Organized by the Santo Niño at 500 Committee of the Order of Saint Augustine – Province of Santo Niño de Cebu, the webinar series is in partnership with the National Quincentennial Committee, Republic of the Philippines, Cultural and Historical Affairs Office – Cebu City, 500 Years of Christianity – Archdiocese of Cebu and Philippine Embassy in Spain.